Ron, knew he was investing in the future by investing in his health. Yet with all the doctors he was
seeing he wasn’t getting better. He knew the medications were not good for him, but the doctors just
kept adding more, but the results were just the same. He hoped some doctor, could explain what the
problems were and how to solve them and he hoped, without drugs and medications.
Ron, not unlike many Baby Boomers, had a lot of ills. From foot numbness, to lower back pain, to aches and
pains to most of his joints, to fatigue and neck pain. He knew that there was something wrong, but no one
heard him or would or could help him. He knew he had to look outside the traditional medical model. So he
made an appointment at the Winner Wellness Center.
Right from the beginning Dr. Winner explained about Kinesiology and it’s natural approach to balancing and strengthening the muscles.
He said if he strengthened the muscles that would lead to a more lasting correction. He then explained
how he was going to target the weakened organs and nutritionally support them as well. It all sounded
good. Now would it all work?
It didn’t take long to see results. As the pains left, he began to see his posture improve.
Ron wanted to tell you his story because he was was hoping for results when he came to the Wellness
Center and got that hope realized and more If you would like to experience what Ron has call Dr. Winner @ 770-536-6600
or go on line to winnerwellness.com an make an appointment. You are totaly worth it. 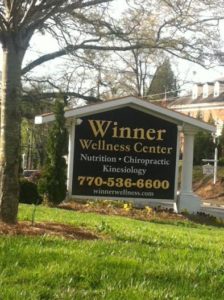